With the launch of the new Kuroshio ’64, Citizen not only offers a vintage inspired watch at an affordable price, but also pays tribute to an exceptional milestone in watchmaking history. Launched in five different models with distinctive dial colours, on bracelet and leather straps, these watches pay tribute to the pioneering spirit of Citizen in wristwatch innovation, inspired by the iconic Parawater of 1959.

Paying tribute to the technical milestone of the first water resistant watch from a Japanese watchmaker in 1959.

While it is normal to expect watches to be water resistant these days, this was not the case in the first half of the 20th century. Certainly, while the water resistant watch had already been invented and patented in the 1920’s by the Swiss, these were, by and large, not widely available to the masses.

To this end, watches were still considered delicate objects that had to be handled with care, especially around water. A simple everyday task such as washing hands required one to take off one’s watch in order to prevent damage, and using it while swimming was definitely something that was just not done.

With a history of continually making watches that would be useful to their owners, Citizen had, along with other watch companies in Japan, already begun research into the subject of making water resistant watches with excellent performance. Due to their early start, they were able to release their watch ahead of other companies in 1959.

The Parawater, the result of Citizen’s research efforts, was the first completely water and dust resistant watch by a Japanese watchmaker, and it was so named due to the technical innovation of water resistance that was the highlight of the watch, with the combination of the word “para” meaning protection and “water” to indicate that the watch was protected from water. To underscore the importance of this innovation, the name of the watch, Parawater, was placed on the dial where the logo of the brand would normally be.

The Parawater was rated to a depth of about 5 bar (50 metres), and it achieved its level of water protection due to the use of O rings that were made of a special rubber (butadiene acrylic nitrile copolymer). One large O ring was mounted on the case back, and this in conjunction with an extensively modified crown and tube assembly each with smaller O rings, made sure that the movement of the watch was completely sealed from water and dust. 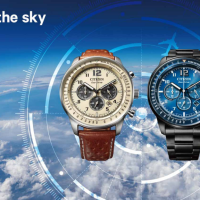